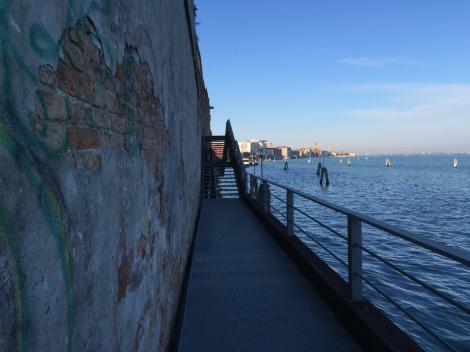 Pathway from PuntoMOSE, the visitor center for the consortium responsible for the construction of mobile flood-protection gates for the Venice lagoon.

In Venice (of all places!), I’ve been teaching a course entitled “The Artful Things of Climate Change.” Its focus was on the relationship between culture and this phenomenon that so obdurately escapes everyday reflection. The class was comprised of students from all the over the world with a large contingent from Beijing. Everyone was engaged, and every meeting was full of a sense of meaningful interaction. It felt to me very much as if we were learning from each other, and exploring important questions together. But as wonderful as this experience has been for me, and I hope for my students, it has also been an inevitably dispiriting one.

Thinking about climate change for twelve weeks is necessarily depressing. The facts are unpleasant to think about, to say the least, and the challenges can seem simply insurmountable. Anyone who has paid even a cursory attention to the subject already knows exactly what I am talking about: rising sea levels, ocean acidification, mass extinction, expanding sacrifice zones, extreme weather, accelerating feedback loops, and so on. The list of all the things that are going wrong is long and growing. I tend to agree with the writer Kim Stanley Robinson when he argues that climate change is more a symptom than a discrete problem; what it is symptomatic of is ecological collapse.

As I prepared for our last meeting together, I found it difficult to end on this note of despair. What is to be done? What kind of future awaits us? It was easy to see that my students felt there is little that can be done and that the future is not something they would want to think too much about. Some seemed to me to be retreating from the subject all together. I wanted to retreat from the subject all together myself. I was feeling depressed. I couldn’t see a path forward, which is especially terrifying for me because I have two young children. I was feeling guilty for having them. 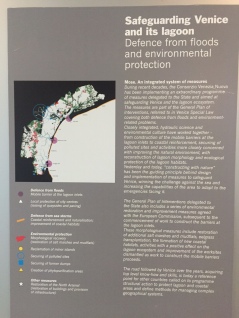 Promotional poster for the MOSE project.

In response to these tangled emotions, for the final class, I found myself doing something I’ve never done before, and something I know I would scoff at if another faculty member tried to do something similar. I tried to predict the future. I began with a couple of caveats as a way to make what I was about to do less foolish-seeming.

I started with these caveats because I wanted to grant myself the right to be wrong. My predictions are part of something basic and necessary, an activity we all do whether we realize it or not. They are also hemmed in by necessary constraints, and require humility about what can be known. So why make these predictions? Because without them I would have trouble waking up in the morning. I have to believe that no matter how daunting the challenges climate change–or ecological collapse–poses, the challenges can and probably will be met somehow.

To say prediction, rather than say simply imagination, is to insist on the probable. These are not events that might happen, but in likelihood will happen. Prediction-making is guided by desire (I wish this will happen) and tempered by perceivable constraints (I know this cannot happen). Predication-making is also often about trying to help make happen, a little push in a certain direction, the outcomes we posit will happen.

Rather than share my “predictions,” what I want to share are the guidelines–desire plus constraints–for making any such predictions. These are the guidelines we discovered together as a class as we talked through how I came to make mine, and how they might formulate, and test, their own.

Here are the guidelines:

Mitigation. Any attempt to predict a future with climate change needs to address the issue of fossil fuel emissions. These emissions are the most immediate causes of global temperature rise, and the many environmental effects this rise in temperature sets in motion.

Just as important, we need to predict how fossil fuel use will be significantly reduced and eventually discontinued in the near future. If we cannot and emissions continue at their current rate, we will easily zoom past the 2 degrees C rise in global temperature averages that has been determined to be the point of extreme climate danger by policymakers.

If we go beyond 2 degrees C, there is almost no purpose in doing this exercise. We will have triggered powerful feedback loops that go far beyond our foreseeable means of containing, and there would be no way to think of how we as a species would respond short of some magical solution. Consider, for instance, Naomi Oreske’s and Timothy Conway’s The Collapse of Western Civilization, which conjures a dystopic future of runaway climate change that is finally brought under control by genetically engineered carbon-eating vegetation.

The point here is to imagine a future that isn’t dystopic and that doesn’t require magic to make salvageable. It is a future we can, instead, imagine as attainable. I am not against dystopic narratives; I value them very much as, at least in part, sharp articulations of our present’s worst fears and imaginative attempts to overcome these fears. What I am looking for here is also a kind of narrative that can as sharply articulate our present’s greatest hopes. One major hope I harbor is that the consequences of allowing unabated emissions to take us into a wildly disastrous situation will eventually, and in short order, be so obviously unacceptable, emissions will be greatly reduced one way or another very quickly.

Adaptation.  Once our predictions have found some reasonable way of sharply reducing, and eventually stopping, the use of fossil fuels, we must turn out attention to the fact that there is already a lot of climate change baked into our ecosystems. Temperatures will continue to rise. Glaciers will continue to melt. The oceans will become more acidic. Extreme weather will become more frequent. Extinction rates will remain high.

So, we have to answer some rudimentary questions. The ones that come most to my mind are:

Economic, Political, and Social Considerations.  One assumption I feel fairly confident in making is that any serious efforts at both mitigation and adaptation will result in significant economic, political, and social disruption. The world’s economies will no longer operate in the ways in which they do today. The political structures of many nations in the world will be challenged, and new ideas about governance will have to emerge. The very ways in which people now relate to each other will be put under a lot of stress, and be altered in ways that might to us today be very surprising.

In thinking about these three considerations, which seem to me inextricably connected to each other, I find myself thinking about what Jedidiah Purdy recently wrote in his book about politics in the age of the human (a geological era that many scientists and critics in the humanities have insisted we have entered): “Either the Anthropocene will be democratic or it will be terrible.”

If our goal is to predict a future that isn’t bleak to imagine, we then need to posit the rise and increasing dominance of democratic forms of governance that make mitigation and adaptation not only possible but livable in a way that encourages human flourishing.

Culture. To predict that any of these conditions will somehow be met (that fossil fuel use will be severely and swiftly curtailed, that adaptation will enable incredibly large populations of humans to live in ecological conditions that are much more severe than the geological era that seems now to have irrevocably come to an end, that economics, governments, and societies will reinvent themselves in the process of meeting these challenges) is also to predict that the ways in which we live our day-to-day lives that give them meaning will change dramatically.

For me, of all the different categories of thought that must go into our predictions, culture is the one most capable of changing in this way. We know that, while cultures can be quite conservative, they can also change dramatically and in remarkably short periods of time. For example, when I was growing up in the 1970s and 1980s, everyone smoked. People smoked in planes, in restaurants, in their bedrooms. My father smoked at least two packs a day. It has now been at least twenty years since my father smoked his last cigarette. He just decided one day, after many months of my sister informing him about how terrible it was for his health and for ours (she had studied this in high school), that it wasn’t something he should do anymore. So he just stopped.